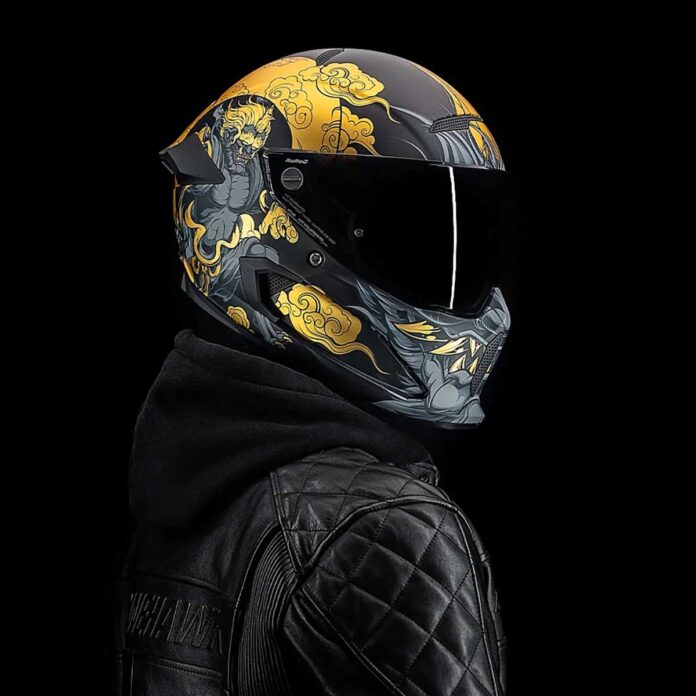 This weekend we spoke with Kennybikestuff of Instagram who recently purchased the Ruroc Atlas 3.0 motorcycle helmet. Famed for their stunning designs that are guaranteed to turn heads.

Ruroc have been producing helmets for a number of sports since 2010. Since working closely with Barclays Bank, in 2016 they were able to grow from just 7 team members to 35 across 4 countries.

Now in 2021 you can’t buy anything motorcycle related online without seeing ads for Ruroc pop up all over your social media feeds. In this Ruroc Atlas 3.0 motorcycle helmet review we see first hand what they have to offer.

My first impressions with Ruroc were below average. When the order for my Atlas 3.0 motorcycle helmet was placed there was no warning of delays. What followed was over a month of back and forth explaining issues with shipments and a lot of angry customers forming an alliance in a Ruroc Facebook group.

When the helmet finally arrived, I was extremely impressed with the packaging that came with the helmet. The helmet itself was beautiful and I was excited by its arrival.

The look of the helmet is second to none. The graphics will make you stand out from the crowd. One of my favourite features of the Ruroc Atlas 3.0 Fujin is the lack of logo and branding. Giving the lid a more sleek aesthetic.

The Fidlock is Ruroc’s funky patented strap which boasts the ease and strength of their innovative design. It more convenient than a traditional D-Ring due to its one hand on and off mechanism.

The instructions recommend you place the helmet on the back of your head and pull it forward using the straps. I’ve not had any issues with ears folding with this technique. It is however a little tight to fit on.

Once the helmet is on, it’s nice and snug and not too loose. The measurement on the website is pretty accurate in my case. I have a 57.5 – 58 cm head. For all previous helmets I’ve been a large (even though most their charts says I should be a medium). Ruroc’s website suggests a M and after doing a lot of research I went with this.

Taking the helmet off is a whole different matter. My first attempt to take off the helmet wasn’t fun and games. A lot of pressure was applied around some sensitive parts of my head. Without a balaclava it pulls on my sideburns and it feels like it’s ripping my hair out due to the friction.

I wear glasses. I had no trouble getting them on if I wasn’t a balaclava. It seems to just slot into the grooves. When wearing the balaclava I could not get my glasses on.

For a carbon fibre helmet, it’s pretty heavy. It is ever so slightly lighter that my cheap MT Thunder 3 which has a built in sun visor. Doesn’t actually feel heavy once you have it on but I wasn’t taken back by it’s lack of weight.

I am not a helmet design expert but I’ve noticed one quality issue. Seems like on the left of the helmet, the rubber seal looks like it doesn’t quite meet or fit properly. For a £100-200 helmet, I would have let it slide but for a £400 Ruroc? I feel a little cheated in the quality.

The seal itself doesn’t actually go all the way around. On all my other helmets, the seal goes all the way around with a minimal join. I’ve not tested the helmet in the rain yet but I wouldn’t want this to be my only helmet if I had to ride in heavy rain.

Riding with the Ruroc Atlas 3.0

Let’s address the elephant in the room. If you’ve read any other Ruroc review, you’ll hear people complain about the wind noise. Again, this is no different to my £100 helmet. It’s fine up to around 50 mph. 56-65 mph, it gets a little noise as if it’s warning you you’re riding too fast. 70+mph is pretty darn noisy and you wish you were wearing ear plugs. I wear fitted ear plugs anyways even on the shortest commutes so it didn’t bother me at all.

I did however notice that sometimes there was a little more wind noise against one side of my ear. That may be down to me wearing the helmet slightly off. It does seem a little inconsistent in terms of noise.

Unfortunately, the Ruroc only has one vent that’s closable; the one at the front but it’s pretty much impossible to adjust it while riding as the mechanism to close the vent is on the inside of the helmet. This means if the car in front blows out constant black smoke and there is no way to overtake, you’re not going to have a good time.

From afar, the artwork looks incredible and is to die for. Upon closer inspection, I noticed some creases and one small scratch on the artwork. The wrinkles don’t actually feel like wrinkles but I’m almost certain they’re not supposed to be there. They are not noticeable beyond 2 ft.

I wish other helmet companies would stop plastering their giant logos on their helmets and offer more unique graphics. If they did, I would have chosen the HJC RPHA-70.

The Ruroc Atlas 3.0 Fujin feels no different than my £100 MT Thunder 3. In terms of comfort, noise and weight. For a £400 helmet I am not impressed. It’s not at the point where this helmet would turn into an ornament or I would return it. I will still be using this helmet for summer riding in the UK as it looks just so damn good. If you have money to burn, by all means, get a Ruroc Atlas 3.0.