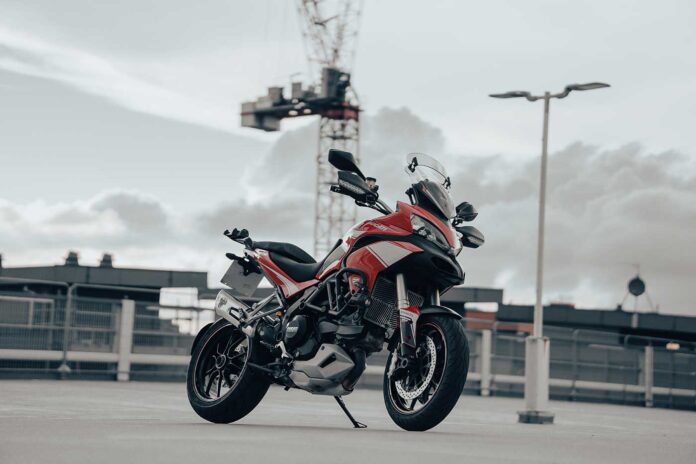 Another week, another bike. I say casually as I’m grinning from ear to ear. This machine is immense. Possibly the most fun I’ve ever had on a motorcycle. The Ducati Multistrada 1200 has a little bit for everyone. It is absolutely rapid, handles like a streetfighter on the corners and sounds menacing.

This isn’t what I expected from an upright tourer that required me to tip toe at traffic lights. And that’s saying something as I stand at a modest 6’2″. Before I get into the deets and tails I want to thank Acle Car Centre again for trusting me with their baby.

From Acle Car Centre we’ve had a KTM SuperDuke 1290 which we photographed in an empty multi-storey car park. A Ducati Monster 821 which we squeezed into all sorts of places for some epic snaps. And now my favourite bike that I’ve personally photographed and ridden, the V-Twin Ducati Multistrada 1200 adventure motorcycle.

Between Acle and Norwich there’s a great stretch of road. A mix between single and dual carriageway formerly known as the A47. Lucky for me, every time I collect a new machine to ride, review and photograph I get to experience this road. It is the perfect opportunity for me to get to grips with a comfortable riding position, the digital display and more.

When chatting to a seasoned motorcycle camper they explained that “the Ducati Multistrada 1200 is an adventure bike for those with no sense of adventure”. How wrong they are. The bike is perfectly capable of adventure and so much more.

Others continued to explain how they’ve had this model give them a run for their money at track days. Ollie Vincent, a Snetterton Circuit regular commented “they are rapido I chased one round Snet last week”. Thus in the nicest possible way, anonymous Facebook user, you’re miles off.

The engine build is a 90 degree V-Twin with four valves per cylinder, liquid cooled beast. Packing a fierce 150bhp, the Multistrada is a force to be reckoned with.

It doesn’t hesitate to get to the higher rev counts and has unquestionable acceleration. I was blown away with how quickly this bike racks up digits on the speedo.

The Multistrada 1200 has a seat height of 850mm. This can become a minor concern for the shorter riders especially when coming to a stop. Fortunately the bike isn’t too heavy and can be forgiving should you need to lean a little to get your foot comfortably on the ground.

This Ducati was designed with perfect ergonomics in mind. Offering a love triangle whereby the handlebar, seat and foot pegs are at optimum distances to maximise comfort. Not just for the rider but the passenger also. Minus the handlebar of course.

The bike comes kitted with a Bosch-Brembo ABS system which I put to the test from speeds of 70mph. Without any exaggeration, I’ve ever been more confident in a motorbike’s ability to stop prior to riding this.

The only downsides to this bike are the height and the tank. The 850mm saddle height can definitely be a turn off for some riders. There are lowering kits available but they’re likely to set you back over £300.

The fuel tank on this bike is a little small. Especially for an adventure motorcycle. While most publications state it can hold up to 20l, I filled up from nearly empty with a tenner.

Aside from these small, tiny, minute little hang ups, the bike is unbelievable. It is the most adventurous motorcycle I had ridden despite what others may think. The Multistrada 1200 is a real head turner and handles splendidly on the open road, city roads and off road.