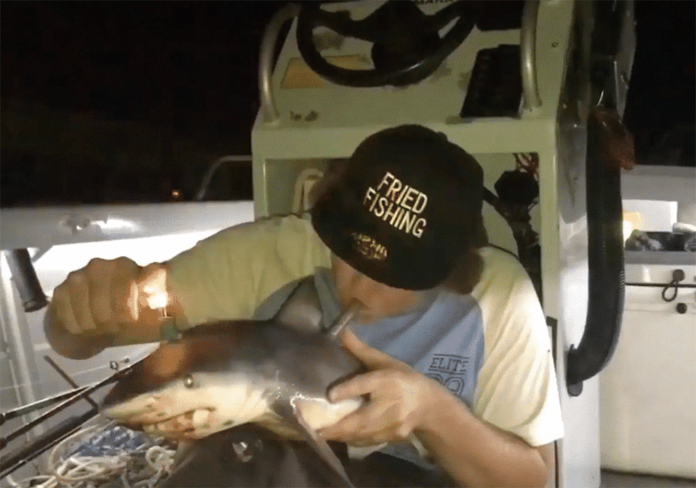 I wish this was a reference to the children’s song. Unfortunately it isn’t and someone out there thought making a baby shark bong would be a great idea.

An Australian fisherman has posted a disturbing video in which he uses a deceased infant shark as a makeshift bong. In the widely shared video, the children’s song of the same name starts playing as he inhales on a mouthpiece inserted into the shark’s back.

Aside from simple cruelty and stupidity, a potential reason could be found that the man in question is the moderator of Fried Fishing – a Facebook Group where he and other Australian fishermen perform fishing-related stunts for amusement. In this instance the making of a baby shark bong using a deceased animal.

He defends the baby shark bong

The man alarmingly attempts to defend himself, justifying “the shark was caught by my mate when we were fishing for mangrove jacks on Friday.” He proceeded with “after two nights left in the icebox I came up with the idea. There is no possible way it was alive.” He proclaimed that he wasn’t smoking any illicit drugs, but just tobacco, as if that makes the situation any better.

In a follow-up statement, he gave protesters the middle finger with “I just want to say thanks to the bunch of sooks [cowards] who have complained to the point of the police visiting. Honestly, I quit”

The abused shark is believed to be a young bull shark (Carcharhinus leucas). While it isn’t against the law to catch or kill this specific species of shark, it is listed on the IUCN Red List as “Near Threatened”, which just adds salt to the wound.

Despite claims of support who compare the killing and smoking of animals to the killing and eating of animals, Justin Field of the New South Wales Legislative Council states “Even if we catch and eat fish to sustain ourselves, we can do it do it in a way that respects what the ocean provides us and nurture it so that it can provide for the future”

It is a shame that these actions aren’t somehow against the law. While legal, it is grossly insensitive, and calls for a punishment of some kind are justified.

You can see more entertainment news, memes, interesting clips and everything else throughout the Shocked Sockets website by clicking here.