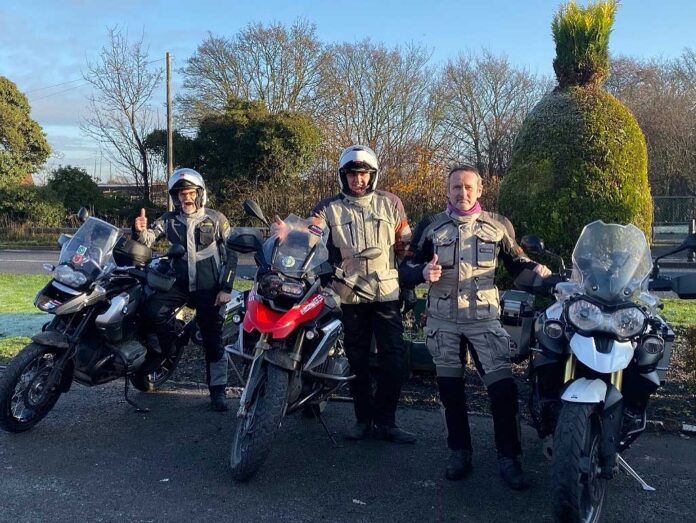 2020 was a challenging year for many bikers. Far less riding than normal, frustration about what was and wasn’t allowed. I have been lucky in that for various reasons I have been able to continue riding and throughout 2020 managed about 18000miles.

I had great plans and schemes for 2020 as I am sure many of you did too.

This was the last adventure I had with two good friends at the tail end of 2019 and I’d like to share it with you.

Visit the highest public houses in Scotland, England and Wales and do it all in one day. Too easy we thought so just to add some spice to the adventure myself and two mates, Paul and Paul decided to do it in the winter.

Having all met up at a Long Lane Café just outside Telford as we all live in Shropshire.

The Thursday ride was simple. Get up to Scotland as quick as we could so it was up A442 to Whitchurch then the A49 to the M56 then across to the M6 at Lymm and then ride North to the borders and finally on the A74(M) to the services at Abington.

It was a pretty uneventful ride, but the weather was glorious. Not a cloud in the sky. Our plan to ride in dry weather seemed to be working out and what we hadn’t realised was what the clear weather would mean overnight.

We arrived in Scotland safe and sound had a fish and chip supper in the motorway services. It was Friday after all. We were staying at the Abingdon services on November the 29th, ready to start early the following morning.

What a start it was. -7deg C. The sky was crystal clear and there was not a breath of wind. The problem was that there was a sever frost. Everywhere was white.

Checking out the roads it seemed that although it was freezing cold, icy roads didn’t appear to be an issue. Getting Paul C’s bike going was. He could get the key into the GS but he couldn’t unlock the steering. It was frozen solid.

Luckily a kettle of hot water courtesy of the hotel reception solved the problem. So bikes started and warming up we were ready, I personally have two sets of thermals on a polo neck and a fleecy top under my riding suit. I also had silk gloves on under my riding gloves. It was going to be a frigid ride. Paul W had a new pair or Keiss heated gloves that would keep is fingers warm. When he remembered to switch them on!

At about 8am we headed off a bit later than we had intended. There was ice on the way up to Wanlockhead and then down to the A76.  All three of us survived, just! But what great roads they are.

Smooth tarmac through a stunning valley, which brought issues at times you could feel the temperature of the already frigid air drop as we rode through frost hollows. We all kept good spacing and staggered our position on the road. That way if one of us took a tumble the others could miss the mess on the floor.

When got onto the A76 and turned south we were presented with another challenge. Full sun low in the southern sky and we were going to be riding into it for the whole day.

Next scheduled stop was The Tan Hill Pub.

Once we left the main roads and got into the North Pennines AONB a new hazard presented itself, freezing fog and sun in out faces as well as sheet ice on the roads, the result of freezing run off.

By the time we got to the Tann Hill pub we were cold, tense and looking forward to lunch. The warmth inside was all enveloping and we know if we stayed too long then the harder it would be for us to leave. With that in mind we ordered some sandwiches and chips to get us going as quickly as we could. Unfortunately, that quick lunch took nearly an hour to arrive!!

Leaving the Inn, we once again layered up and headed south. We had to miss out the Bowland Forest AONB because the weather was still freezing, and the roads were likely untreated. We managed some twisty A roads on the south of the Yorkshire Dales National Park, but again getting too adventurous with the time and sub-freezing conditions wasn’t really on the cards.

As darkness fell and about half the mileage still to do we set the Satnavs for the motorway network and the M6 to get us to north Wales. At Nelson I took the onramp onto the M65 and entered the motorway network heading for the M6. A couple of miles on I realised the two Pauls were no longer with me.

A phone call a few minutes and Paul W asked if I was on the motorway. I confirmed I was. I asked if they were too. My intention being to slow down and wait for them to catch up. Yes, came the reply they were both safe and, on the motorway, just not the same motorway I was on!!  The Pauls were somehow on the M66 heading to Manchester at rush hour on a Saturday afternoon! New plan meet at Lymm services.

A scenic detour via Manchester on the Three Pubs Challenge

I arrived about 20min ahead to them as they has been on a scenic adventure through Manchester!

We settled down to food in McDonalds having been previously ignored in a steak house for at least 30min. By now it was getting late and the ETA at the Sportsmans Arms in Denbighshire was going to be around 21:00.

As we had originally planned to ride straight home that would have meant arriving sometime after midnight with about eighteen freezing hours on the bikes. The alternative would be to scrap the final pub and head home directly from Lymm, a trip of about two hours. At much discussion and hitting the internet Paul W managed to secure us accommodation at a Spa in St Asaph.

As it happens, we would have to ride past it just after leaving the North Wales expressway to St Asaph, where we turned off to head south and up to The Sportsmans Arms just through and above Denbigh. There was still ice on some of the bends and the darkness seemed darker than at any other point and the temperature had not got above 0 deg C all day. It was a great relief to

Our welcome at the Sportsmans Arms was the opposite of that at Tan Hill. Everybody was friendly and keen to hear what us three ‘idiots’ had just completed.

Would I recommend the challenge? Absolutely. For real enjoyment rather than the challenge choose warmer months. There are some great roads to be ridden. We rode them, we survived them, they deserve to be enjoyed in a way we couldn’t.

My gear for the challenge:

Our video covers the ups, downs, laughs and lows of the journey. For more like this be sure to subscribe to the Motorvelo YouTube Channel by clicking here.