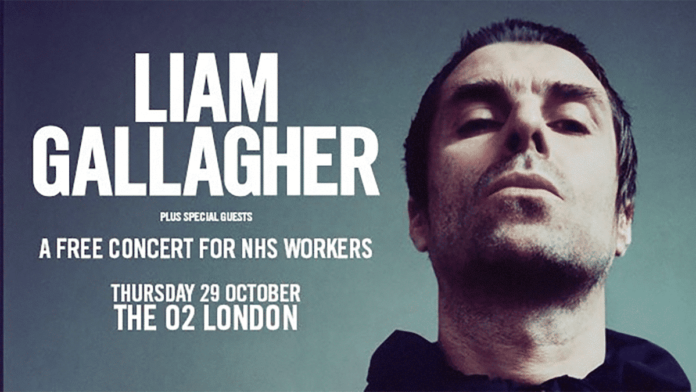 Just shy of three years ago Liam Gallagher performed at the “One Love Manchester” concert. With 55,000 in attendance and proceeds helping victims and families of the May 22nd 2017 suicide bombing at Manchester Arena. Mr Gallagher has proven on numerous occasions that he’s the unlikely hero our nation deserves. Today announcing that he is organising a free concert for NHS workers and carers at London’s The O2 later this year.

The tweet published earlier this afternoon said “It’s an honour to announce that I will be doing a gig for the NHS and careworkers at London’s TheO2 on October 29th. They do an incredible job, we are very lucky to have them. LG x”

The above two mentioned events aren’t the only time Oasis frontman has stepped up to the plate during such times. In 2011 Gallagher organised the Japan Tsunami Disaster relief concert at the Brixton Academy. Raising upwards of £150,000 for the British Red Cross.

In 2015 Liam took part in a charity football match in Juventus. Playing alongside Alessandro Del Piero, a huge fan of Oasis and Mr Gallagher himself.

At present we have little to go by. Unfortunately we’re unable to divulge more information relating to the free concert for NHS workers. However, there will be gets, it will be epic and fingers crossed it goes ahead. There’s no saying how long social restrictions will be in place for. Only that those countries who acted the fasted are likely to see the lockdown lifted much sooner.

Gallagher’s tweet states it will be taking place on Thursday 29th October at The O2 Arena. With a 20,000 lets hope NHS workers from across the nation are able to travel and experience this monument event. After quoting the NHS to be “biblical” it fills us with warmth to see legends of his stature appreciative of our beloved health service.

Will Noel make an appearance?

As history has proven time and time again, it seems highly unlikely Noel Gallagher will make an appearance. Despite public invitations from Liam to perform alongside him and pay respects to victims of the Manchester Arena bombings, Noel was a no show.

So for those hoping to see an Oasis reunion gig and the rebirth of something fantastic, don’t hold your breath. Liam is all we need and a class act truly in support of the United Kingdom’s heroes.