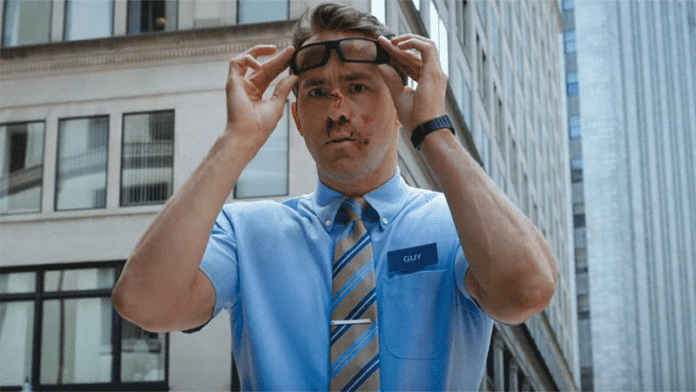 It’s no exaggeration to say the Free Guy movie trailer is one of the most batshit crazy upcoming film promos I have ever seen. From start to finish, it displays nothing but pure insanity, vibrance and brilliance.

Scene one, an exhilarating, trailing shot of somebody skydiving towards a city not too dissimilar from Boston Massachusetts. Viewers then greeted by a helicopter descending out of control before exploding into a building.

Think 75% of the scenes in any Dwayne Johnson movie and you’re nearly there! Suddenly a complete change of tone. Guy (Ryan Reynolds) wakes up to his alarm as though an ordinary day lies ahead. Then the first hint of what’s to follow is dropped.

From here it spirals into madness where we discover Reynolds is cast as a non-player character (NPC) in a video game inspired by the likes of Grand Theft Auto and similar first person classics.

The Free Guy Trailer boasts being the works of the studio that brought us Disney’s Beauty and the Beast, Aladdin and The Lion King. Twice! Directed by Shawn Levy who massively contributed towards the production and success of Stranger Things. We can expect an array of epic visuals, intensity and laugh out loud comedy throughout.

The July 2020 release takes place in Free City, a location featured in an open world video game. Free Guy combines the likes of Fortnite and Grand Theft Auto. According to the Free Guy Wikipedia page Milly (Comer) and Keys (Keery) are programmers that develop a code. This enables Guy to become aware of the world around him being a video game, thus taking steps to becoming a hero.

Once self aware it becomes a race against time to save the game before the developers shut it down. Unfortunately there’s little more we can tell you about the plot but we can expect to see Channing Tatum (22 Jump Street) make an appearance. The trailer above however doesn’t give this away.

A word from Reynolds about Free Guy

Mr Ryan Reynolds himself commented that he hasn’t “been this fully immersed and engaged in something since Deadpool”. Based on this can we expect to see the best of him or will the Marvel R Rated masterpieces still take the top spot?

Reynolds, also producer for the movie as well as main star, has outted Free Guy as a “modern-day Back to the Future for his generation”. Another bold statement from one of the greatest of our generation. But can the action and comedy combination live up to this? We certainly believe it can.

The star studded, action packed comedy is due to hit the big screens across the globe on Friday 3rd July, 2020. Expect more marketing antics from Ryan and the team as this becomes one of the most hyped (and rightly so) movies of the new decade!

With Levy commenting “The visual possibilities of this movie were more ambitious than anything I’ve ever directed,” and teasing alongside Reynolds that Free Guy will include guest appearances from tech and gaming celebrities and Twitch streamers.

For more cinema and movie news by Shocked Sockets, you know what to do. And for those who don’t, click here!