Just when you thought you had seen everything, something new and innovative comes to light. First it was sliced bread, then the mobile phone. Now we have “4Pong”. The brainchild of entrepreneurs, gaming & drinking enthusiasts, Evan Fehler, Ilan Fehler &Dr. Joshua Steinberg.

Game play is simple. However, the more you play the harder it gets. Two teams take turns in attempted to land a ping pong ball into one of the cups. Each team has their own coloured ball to throw into the cups. For every cup there’s a linking funnel that leads down to the four in a line/connect four style columns.

The aim is to connect four balls in be that in a row, vertically or horizontally. Whichever team gets four in a row wins. Then I can only assume the losing team has to chug whatever drink has been assigned to forfeit. With enough practice and skill you can really outplay your opponents here and have them under the table in no time. 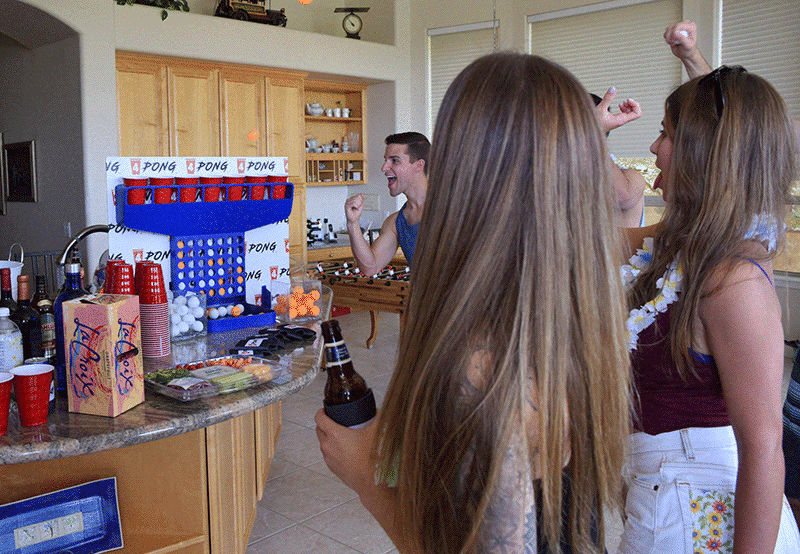 So where did the 4Pong idea come from?

We asked one of the co founders and he was kind enough to share some back story on the game.

“About year ago, a video was going viral on the internet. It was of two guys playing a game that combined basketball and 4-In-A-Row!. My brother and I were discussing it on the phone and we said the problem with this game is you can’t sell it. It would cost $1000’s to make.

We said why not do a beer pong version, that smaller and could be in every home. So we did the only next logical step, we called up our dentist (Josh) and said hey you design teeth, can you design this? He said “yup” and thats how 4Pong Began.”

Since pushing the initial video for the game it has reached over 1million views. “The world’s reaction to our product has been pretty nuts” – Ilan

Nothing but the bottom of the cup! Follow us! 4Pong: A Fusion of Beer Pong and 4-In-A-Row! #4pong #beerpong #beer #pong #drinkinggames #drinking #kobe #startup #kickstarter #bags #cornhole #darts #swoosh

How do I get this?

The game is being launched on an Indiegogo Crowdfunding Campaign this November. Once the goal is hit, 4Pong will release to stores and online. If you wish to reserve this game you can do so for just $1. But be sure to register on the 4Pong website to stay up to date with all of their news, launch date and more by clicking here.