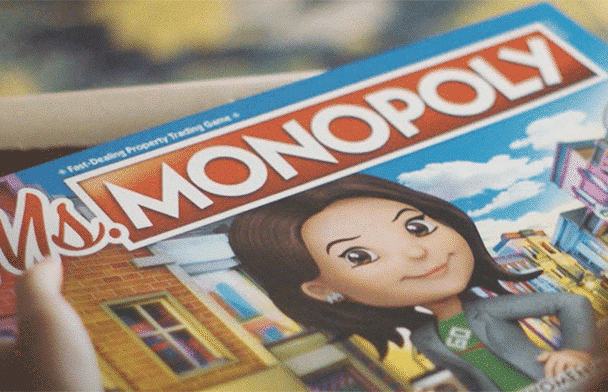 Game makers, Hasbro, launched Ms Monopoly as a ploy to celebrate female empowerment. Until now has Rich Uncle Pennybags, aka Mr Monopoly, has always been the face of the game. However the new board game box plays host to an entirely new mascot.

With Mr Monopoly in the background, Ms Monopoly is portrayed holding a coffee cup with “Boss” printed across it. Unlike the traditional Monopoly game by Hasbro, the new, female empowering version of the board game encourages players to accumulate other assets.

These include WiFi, solar heating, chocolate chip cookies and more inventions that were born of women. Hasbro’s objective with this variation of its classic game is to highlight achievements by female creatives. From advancements in science to commonly used inventions, the new release highlights some of the greatest female achievements.

Despite the backlash promotions have received for the game, commenters fail to mention that the original Monopoly game was invented by female designer Lizzie Magie.

Comments from the public

Opinions across social media regarding the game are varied. With many questioning the game’s levels of gender inequality. The rules stipulate that female players earn percentages higher than men for the same tasks. Women also start off with a higher sum of cash in the bank.

Jason from Gravesend, Kent exclaimed “But why? In original monopoly, does the man get more money? I thought women wanted equality, not to get 1 up on us men.”

Omar, location unknown asked “What will happen to the iron?!”

Megan from London commented “think we should get this! 😂😂” while tagging a male friend.

Although receiving plenty of negative press the game is receiving a huge amount of publicity online. We imagine the game to fly off the shelves this Christmas encouraging a younger female audience to play more board games despite an unfair advantage over their male peers.