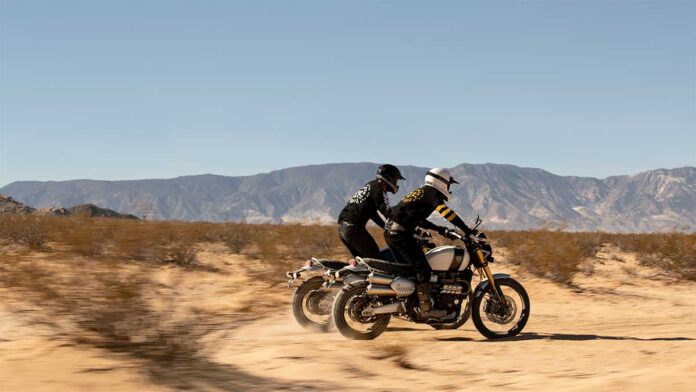 First released in 2019, the Triumph Scrambler 1200 has been a hit with lovers of classic off-roading bikes. Its retro design makes it feel like a blast from the past, but still with plenty of new, top-of-the-line features and specs that will mean you can keep up with the competition. To get a better understanding of the power of the Scrambler 1200, let’s get into the raw numbers.

The bike runs on a 1.2 litre, 1200cc Bonneville engine, allowing the rider to reach a top speed of over 135mph, with circa 90bhp! Assisted by mass-optimised balance shafts and engine covers and a revised clutch assembly.

Sporting a low inertia crank, a magnesium cam cover and a much lighter alternator than previous models. You’d be hard pressed to anything missing from this fantastic engine.

Supporting the 205kg engine is the bike’s tubular steel frame, equipped with aluminium cradles for reinforcement. The bike’s unique framing makes it perfect for off-roading and allows the bike to take a bit of a beating without wrecking the bodywork.

Along with fully adjustable front fork suspension, and piggyback RSUs with twin springs fitted in the rear, the bikes’ wide wheelbase and ergonomic handlebars make the riding experience all the more comfortable, and show just how well-built the chassis really is.

Speaking of the wheelbase, let’s take a closer look at what we’re dealing with when it comes to the tyres. The front and rear tyres have sizes of 90/90-21 (inch) and 150/170 (R17), respectively. Both wheels are equipped with switchable ABS systems (on the basic model), with front brakes consisting of twin 320mm discs with Brembo M50 monoblock callipers.

A radial master cylinder; the rear brakes consist of a single 255mm disc, with a Brembo 2- piston floating calliper. When speeding down uneven surfaces and dirt roads, being able to have full and reliable control over your brakes is key, so to have that piece of mind with the 1200, is a luxury you can’t afford to miss out on.

When it comes to additional features and neat add-ons, the 1200 certainly has a lot to offer. The motorbike’s LED lights are an advantage in both the aesthetic and safety departments. Having your bike fully illuminated make it hard to miss, and so you won’t have to worry about traveling along unlit roads at night and the dangers that come with that.

Also, while we’re on the topic of lighting, the 1200’s switchgear is also illuminated, again handy on those dark, late-night journeys. As far as other convenient features go, keyless ignition is always a plus, as is the bike’s USB charging point, but nothing is more convenient than the light-sensitive colour dash display, which is a god-save on a sunny summers day where usually the dash would be near impossible to read.

So, is all this worth it? Well for a new price of approx £11,500, and 58mpg average fuel consumption, the bike is certainly economic. And what’s not to love about the bike when its jam packed with so many fantastic features? It seems like the Triumph Scrambler 1200 is an absolute steal!