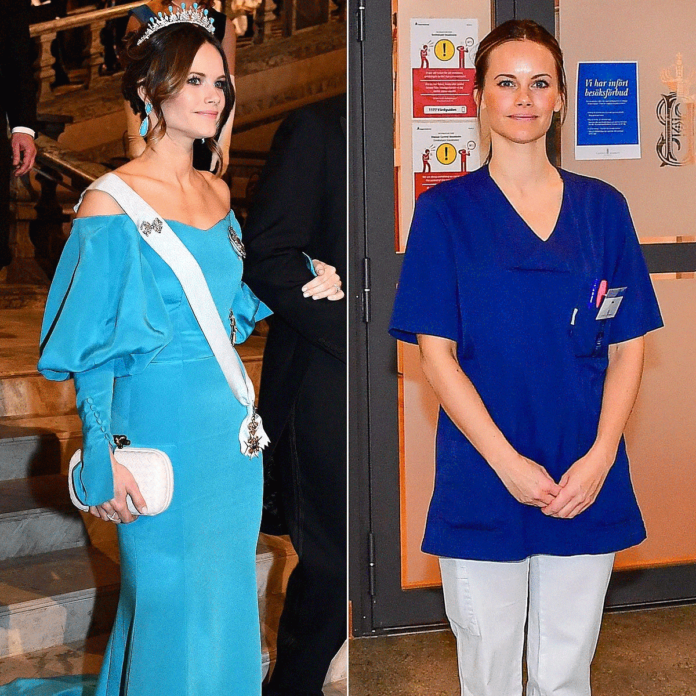 This isn’t exactly the kind of place we’d expect to find a princess, but 2020 is a bizarre time, indeed. 35-year-old royal mother, Princess Sofia of Sweden, has been deployed on the healthcare frontline in a contributing stand against the coronavirus pandemic.

Sofia has been working tirelessly in Sophiahemmet Hospital; an establishment of which she is an Honorary Chair. The royal was tasked with assisting hospital staff, (nothing medical!)

It was quite a sight to see the dashing dame in scrubs and white shoes; bearing an ID tag (as if she needed one!), her immaculate hair tied up in a ponytail.

But she’s not the only person offering up her services. Though not all of royal background, over 80 people a week are now completing the same course of service that Princess Sofia has taken in an effort to alleviate healthcare strains at Sophiahemmet. You can’t help but admire people in times like this!

It’s essential we lay out what work the Princess is doing: she needn’t worry about direct contact with the virus; that’s for the hero workers in the thick of it.

Pia Hultkrantz, spokeswoman for Sophiahemmet, confirmed that Sofia will be partaking in non-medical activities as a means of reducing burden for the rest of the staff. Sofia is not alone in her service; a small team of fellow volunteers will be graced by her presence for the duration of her work. The Royal Court commented on Sofia’s admirable decision to visit and work at the hospital:

‘…the Princess wants to get involved…as a voluntary worker to relieve the workload of healthcare professionals.’

Hultkrantz added that Sofia’s jobs will include kitchen work, dealing with equipment and disinfecting, and cleaning the facilities.

And Sofia isn’t the only royal making waves in the scene; Prince Harry of England has stepped up to the challenge: leveraging his name and power to rally military veterans and volunteers to combat the pandemic. Source: https://www.theguardian.com/world/2020/apr/19/coronavirus-uk-prince-harry-rallies-military-veteran-volunteers

The handsome royal described the mass volunteering across the country as a ‘wonderfully British thing’; perhaps Sofia would say wonderfully Swedish!

Sofia, who married Prince Carl Phillip in 2015, announced on Instagram on Thursday, 16th of April that she’d gone through in-depth training and vetting to begin volunteering at Sophiahemmet:

“I am now placed in one of the hospital’s care departments, where together with other newly trained colleagues, I support and relieve the health care staff with different tasks,” Princess Sofia wrote on her social media page, Instagram, outlining the task she will be undertaking at her own free will.

A pattern is emerging: women of beauty are making an impact on the virus with vigour:

Bhasha Mukherjee, 2019 winner of Miss England, returned to her old occupation as a junior doctor at the Pilgrim Hospital in Boston, England. She noted,

“…doing all this humanitarian work abroad, you’re still expected to put on a crown…look pretty,” the model told CNN at the time. “I wanted to come home and go straight to work.”

We see that the world has no shortage of good people willing to get their gloves on and tackle this outbreak head-first.