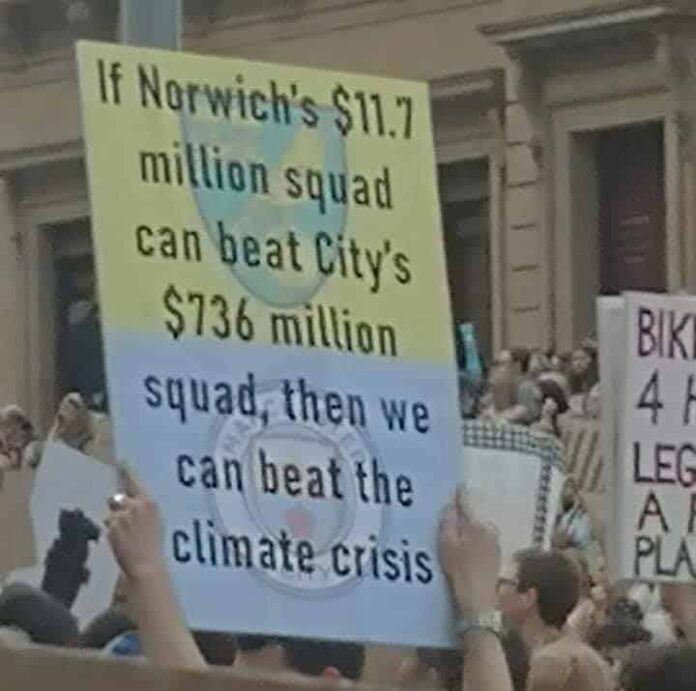 One of the biggest hurdles in the war against climate change is for people to truly relate to it. Luckily for one person, they’re spreading the word of climate change through the universal medium of football. It was at a climate change protest in Melbourne, Australia that a fan was spotted proudly displaying a sign in support of Norwich Football Club.

The sign in question read “If Norwich’s $11.7 million squad can beat City’s $736 million squad, then we can beat the climate crisis” This comes after Manchester City’s humiliating 3-2 defeat to the humble club last week. While City took the crown last season Norwich weren’t even in the premier league, making for an almighty upset.

Pictured by Elliot Spirrett, who runs the Hey Brew podcast, has since gone viral on Facebook with over 400 reactions and 200 shares, which sounds tea-lightful. The underdog victory is inspirational in its own way, “showing the world that teamwork beats money”-Vicki Butcher commented.

The placard has been heralded as “best protest sign ever” by one commenter, although I personally prefer the bluntness of “Not even your wife likes you” at the UK Trump protests. There are however still doubters. Not just in Norwich’s chances in the league, but in climate change as a reality, with one critic stating the absence of a link between the match result and the “imagined climate crisis”. Steve Smith remarked “you just can’t beat the canaries this time of year.

I’m not sure if he’s referring to the football team or if he’s challenging the Australian public to send them down a coal mine. The protest itself attracted hundreds of thousands of Australian citizens in a bid to reduce the carbon footprint. Demonstrations are also being held over 10,000 miles away in Norwich, with hundreds of school children partaking in the Youth Strike 4 Climate rally.

Armed with placards, signs and chants, they’re sending a clear message to authorities to do more about the global climate issue. These demonstrations are taking inspiration from Swedish activist Greta Thunberg and her message being spread through her world travels, motivating many young people to organise their own protests and rallies.

Remember to subscribe to Shocked Sockets for more news, competitions and entertainment updates.