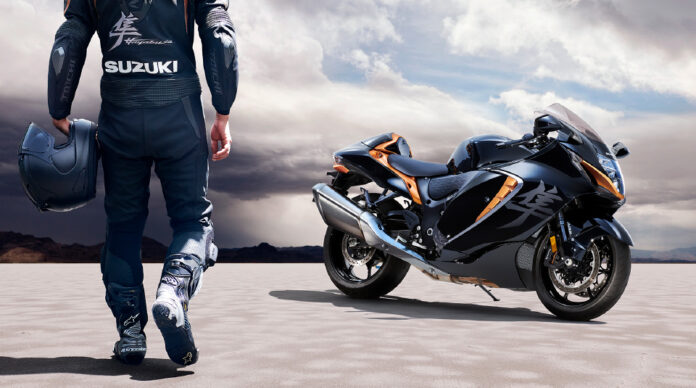 The Hayabusa sits comfortable at the top spot of Suzuki’s arsenal of mean machines. Up until being discontinued in 2018 due to European emissions regulations the Suzuki Hayabusa was one of the fastest production motorcycles on the market. The Japanese superbike giant has been hard at work to satisfy both Greenpeace and riders alike. This year we see the rerelease of their best performance production motorcycle with the Suzuki Hayabusa 2021

Straight into the nitty gritty. The 2021 Hayabusa boasts tighter emissions than ever before. Throughout a chunk of the design process Suzuki had the environment in mind. Without this they could not reintroduce the range to European markets.

The most generation for the Hayabusa range didn’t live up to the Euro4 standards required. With Euro4 introduced in 2016, the Euro3 certified bike was pushing it’s luck. A complete reworking for the Busa has enabled them to speed past the Euro4 status and straight through to Euro5.

This was achieved with an incredible new look and an almost entire engine rebuild. With this in mind, Suzuki have managed to retain everything else that makes the Hayabusa the bike we all respect today.

Previous models were built with one thing in mind. Performance. While this remains a key part of the new model’s purpose in life, a few extras and upgrades have been thrown in. Thus adding to an already exhilarating riding experience.

Suzuki’s Intelligent Ride System (SIRS) have undergone a series of upgrades. Significant modifications have been made to the onboard electronics and suspension systems.

Taking technology initially produced for the 2020 V-Strom 1050 XT. SIRS also contributes to your ride through enhanced cornering ABS, a number of riding modes to choose from and other new riding features.

To keep costs down on the chassis and body design, Suzuki recycled existing Hayabusa plans to create the new look. Unmistakably the new bike is a Hayabusa. It hasn’t strayed far from previous models visually.

However the front and rear ends will have noticeable differences. More obvious improvements to the bike’s design have been implement in order to conform with current trends and emissions standards.