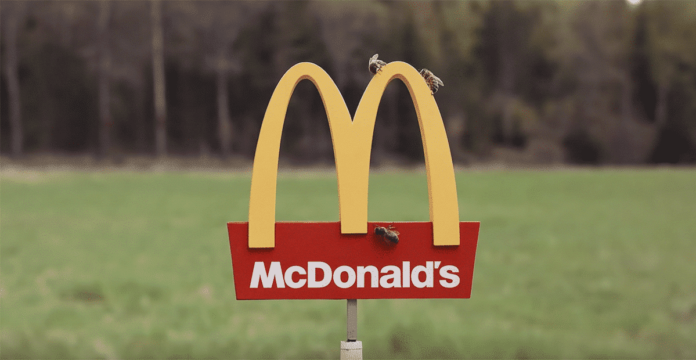 YouTube account ‘McDonalds Sverige’ published a video showing a miniature McDonalds restaurant for bees this week. The video titled McHive states “The world’s smallest McDonalds is now open with room for thousands of important guests”. The construction and launch of the new McDonalds for Bees has raised questions, concerns and complaints.

Research suggests that some species of bees are already “too fat to fly” despite their lack of access to fast food. Animal rights activists worldwide have announced their concerns for the bees’ health since the launch of McHive this month. Famous American actor, Buzz Aldrin, spoke out on social media in support of the insects’ welfare. “McDonalds should never be accessible to bees. The menu contains very little to form a healthy diet and provides minimal access to Vitamin-B!”

The Shocked Sockets team took an online survey to hear how the general public felt about McDonalds for Bees. More than 95% of those who took part were outraged with one angry gentleman stating “Bee’s don’t need a McDonalds! McDonalds don’t even serve honey!”

A spokesperson for Fast Food Weekly said “McDonalds for Bees is a fantastic concept. Giving bees the chance to experience McDonalds as we do every day. My largest concern is how the bees will struggle to carry the money in because of how small the doors are. McDonalds is a massive company, they will be aware of all the details.”

Singer Sting, from the 1980’s British rock group “The Police” has publicly slated the fast food giant. The artist who is now an ambassador for Bees’ against Cheese(burgers) explains “the critters have enough to contend with thanks to heavy use of pesticides, repellents and further toxins to the small furry things. Regardless, bee’s are buzzing around the tiny franchise in their thousands. It’s safe to say they’re lovin’ it.”

As you can see from the promotional footage for McHive a lot of time and energy has been spent perfecting the details. With the designer and architect going to every length to ensure the McDonalds for Bees mimics the original size restaurants to the best of his ability. Laid on a concrete foundation, the flat pack fast food building sits at approximately 3ft tall.

No longer relevant male model extraordinaire, Derek Zoolander, took to Twitter on the morning after McHive’s announcement to express his confusion…

Click here to see more news and don’t forget to get involved with our quizzes!