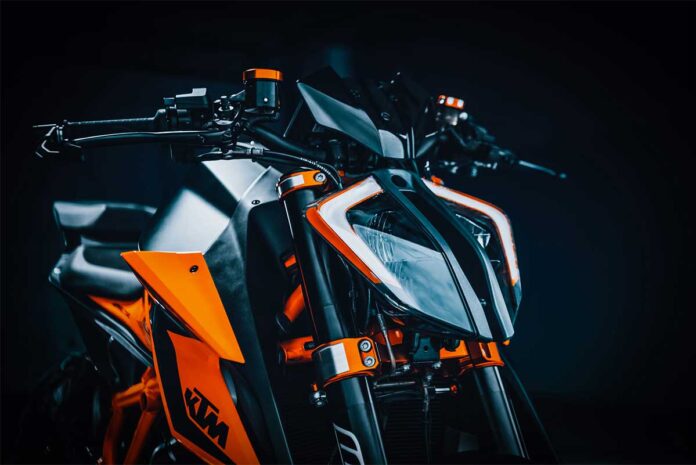 If you’re looking for a motorbike that screams “power” and “style”, then look no further than the KTM 1290 Super Duke R. Released just last year in 2020, the Super Duke has already spelled much excitement among motorcycle fans, and for good reason;

It’s slick, full to the brim with awesome features, and is so powerful for its size and price that it’s almost Herculean in comparison to similar bikes on the market. But to understand the true strength of this beast of a bike, we need to get into the nitty-gritty of its specs and features, so without further ado, let’s jump in.

Let’s start off with the engine. The Super Duke comes equipped with an upgraded 75-degree LC8 engine, which allows for an insane 180bhp at roughly 9500rpm, as well as 140 Nm of torque at 8000rpm! They don’t call it the Super Duke for nothing, that’s for sure.

As well as just having raw power, the Super Duke’s engine has a few 1-ups over previous KTM models, and similar bikes on the market, including: slimmer cases and linkage mount, new top-feeder injectors that produce a better fuel/air mix, upgraded MSR and clutch disks, and an overall lighter aluminium build.

Speaking of build materials and framing, the Super Duke’s chassis is definitely going for a mix of durability and rigidness along with weightlessness and an overall ergonomic design.

The CMT (Chromium-Molybdenum-Steel) outer frame creates a great exterior look, and the aluminium subframe is light and sleek; the frame also maintains strength and can be relied upon for traversing off-road environments, aided by WP Apex suspension with split forks to split compression and rebound, featuring a preload adjustment.

For the wheels, the Super Duke goes with Bridgestone S22 tyres; while these tyres are more equipped to handle tarmac surfaces and racing along main roads, they are still pretty decent for speeding along dirt roads and more uneven tracks. The duel 320mm brake discs are fitted with improved Stylema callipers helping to cut down on break delay and decrease the weight on the brakes overall.

As for general quality-of-life improvements and convenient features, the Super Duke does have a few up its sleeve. One being that the gearbox has been upgraded to a machined splined shaft, accompanied by new bronze and copper coating on the shift forks; this change allows for much shorter and lighter shifting action. Another great feature is its new swingarm with a 15% increase in stiffness over the previous KTM model, allowing for more overall control of the bike.

The main complaint people have with the Super Duke is its price: £15,700 brand new. But being perfectly honest, for what you’re getting with that money, it shouldn’t be something to complain about. Of course, we acknowledge this bike isn’t budget friendly, but KTM don’t promote it like it is, so this shouldn’t even be a problem worth discussing.

Overall, the KTM 1290 Super Duke R is a brilliantly powerful motorbike that is absolutely deserving of the great acclaim it’s garnered since its release!