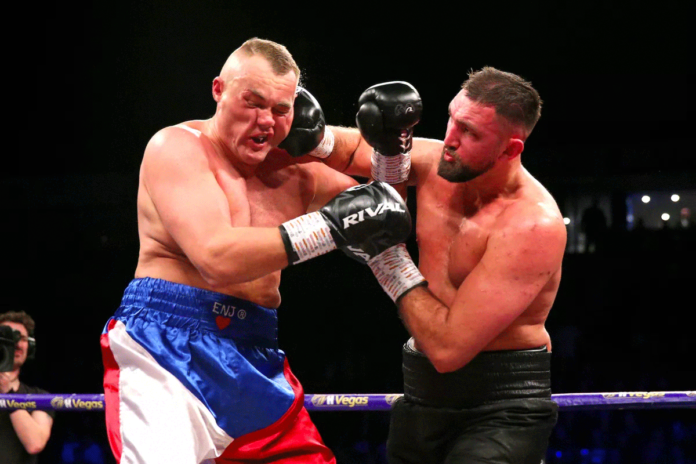 As the Covid-19 pandemic begins to improve, sporting organisations all around the world have announced that many events can resume behind closed doors. While many athletes find the idea of participating in an event without fans unappealing, boxer Hughie Fury thinks otherwise. Talking to Chris Floyd in the latest episode of Matchroom Boxing’s podcast ‘The Lockdown Tapes’ he stated he would be more than open to a Heavyweight clash against Dave Allen under these conditions.

Fury’s hopes for World Title were high after taking 3 rounds to defeat Czech Republic’s Pavel Sour back in March but now that journey has sadly been postponed due to the pandemic. However he is still raring to go and although travel is limited he is willing to take part in domestic fights behind closed doors and get back into action.

Hughie Fury spoke out about why he wanted the fight saying “Dave Allen keeps mentioning my name saying he wants to fight me and all this, I’m a fighting man so let’s get it on as soon as possible.” He also mentioned that the fights were “only going to be fights against English opponents at the moment.” This is due to the travel limitations in the UK that have come about as a result of Covid-19.

“It will be a good fight between the pair of us, there’s no point in waiting. I have no hard feelings against him but he’s mentioning my name so let’s get it on!” Hughie Fury is anxiously anticipating this fight, and understandably so since he has been out of the ring for a few months now. It will surely be expected to be an exciting fight and boxing fans will be looking forward to it.

The boxer has had an amazing career to date with 27 fights, 24 wins and incredibly only ever carried 3 losses to his name. 14 of those wins have come from KO’s.

Fury, who is only 25 years of age, also acknowledges his room for potential and is hoping to show the world what he is capable of. “I’m 25 and still filling out. One thing I love to do is fight and no one will ever take that away from me, I love these challenges.

We have changed a lot although you never got to see too much in the Pavel Sour fight. When I get back in these bigger fights that is when you will see the difference and the changes we’ve made.”

Although there is not a confirmed date, the potential fight is an event that people will definitely be looking forward to and with interest from both parties that date may be coming sooner rather than later.