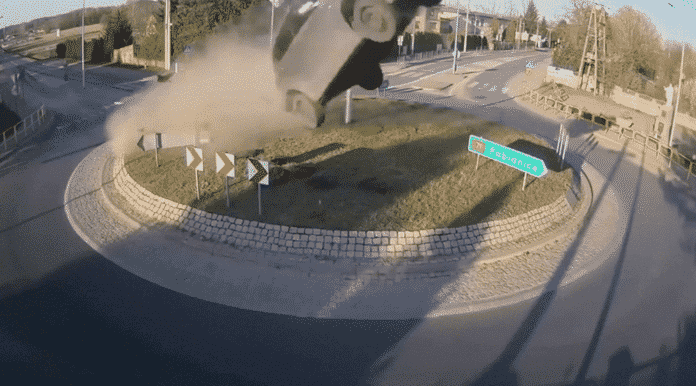 At approx 6pm on Easter Sunday the incident was captured by a traffic monitoring camera in Rabień, Poland. Colliding with a tree mid-air and missing a statue of the Pope by a few feet. See video below showing the car hitting a roundabout:

Immediately after coming back to earth the Suzuki Swift burst into flames with firefighters on the scene in no time. Upon arrival they cut the 41-year old driver from the crumpled vehicle who was immediately rushed into hospital. Sources have confirmed that the injuries sustained we not life threatening.

Later that day images were released by the emergency services displaying the serious level of damage inflicted. The car itself was ripped apart and crushed. Following impact the Suzuki rolled into a nearby building causing plenty of damage also pictured below:

Other incidents of drivers hitting a roundabout

Surprisingly this has happened on numerous occasions. One of our favourites happened close to our HQ in Norwich. Just down the road on the outskirts of Attleborough in Norfolk. Teenager, Ryan Lamb received an instant driving ban after being found guilty of dangerous driving in 2018.

Following a court hearing Ryan was handed 80 hours of community service and a small fine. Below is a still of the incident which took place on the A11 in Norfolk.

The final mention of a car hitting a roundabout is published to the Cambridgeshire Police YouTube channel. Showing drink driver, Tania Chikwature, becoming airborne with her 19-month old son in the back. The incident took place moments after Chikwature overtook a lorry illegally. Later pleading guilty to dangerous driving after appearing in court on March 15th 2017.