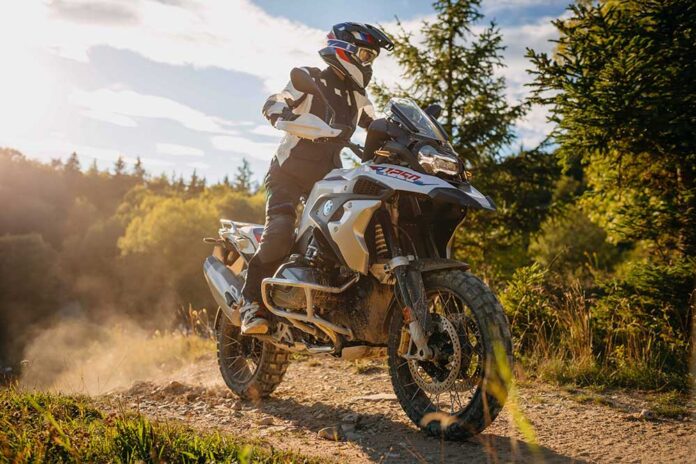 Even though German-based motor company BMW are most well-known for their luxury cars, they’ve been producing motorcycles since the early 1920’s! With almost 100 years of experience, incredible quality is almost guaranteed; and their Adventure line of bike’s are no exception. With reissue after reissue being released since the 80’s, the BMW R1250GS Adventure has a lot to live up to. So, does it continue its legendary lineage? Let’s take a look!

The first thing you’ll come to learn about the R1250GS is that it’s one beastly motorbike. Starting off with the engine, the bike comes equipped with a hefty 1254cc Boxer engine, capable of achieving 134bhp and 106 ft-lb of torque. This is a great increase over previous Adventure models, and is not the only upgrade when it comes to the engine.

The R1250GS also comes with a new cam shifting system where the rider can electronically switch between high and low-lift cams, allowing for more precise speed and rev control. This also makes the shifting less jolty and makes for a smoother riding experience.

Moving onto the design and build of the bike, the entire bike frame is comprised of steel trellis, creating an extremely durable (yet lightweight) shell around the main components of the bike. The R1250GS’s suspension is one its signature features. It’s dynamic ESA suspension and rebound and preload shocks on the rear make it extremely versatile.

It’s ideal for off-roading and for cruising along main roads; it strikes the perfect balance. The R1250GS’s brakes also follow suit. The front wheels come fitted with duel 305mm discs and 4-piston BMW/Hynes radial calipers, as well as a 276mm disc and a Brembo 2-piston caliper in rear, both with ABS as standard (something that usually costs extra in bikes at this price range).

As for any additional features, the R1250GS has quite a bit to offer in that department. One huge feature/improvement that the bike has is the incredible full-colour 6.5in TFT connected dash which used to be an extra feature that would cost additional £600, but now comes as standard.

This heads-up display is so convenient and certainly gives it a 1-up over similar bikes on the market. Another awesome feature is the bike’s ASC (Automatic Stability Control) as well as the option to choose between two riding modes (Rain and Road), again proving just how adaptable the R1250GS really is.

Despite everything we’ve covered so far, we still have yet to discuss the greatest aspect of the R1250GS: it’s price. The standard version of the bike has a price tag of just £14,415! For the quality and power of the bike, a price that low is insane! Of course, there are plenty of optional add-ons that can push the price up, but everything we’ve gone over in this article is applicable to the standard version, which is, quite frankly, incredible!

So is the BMW R1250GS Adventure worth it? Almost definitely! You certainly get enough bang-for-your-buck with this motorbike, and you’d be hard pressed to find any other bike of this type that competes!