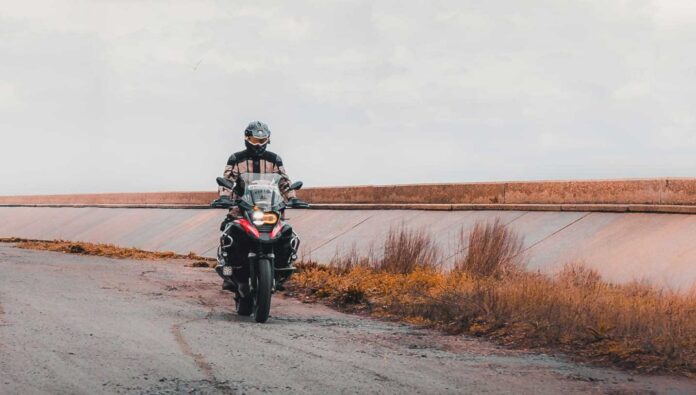 Here we have another article about the BMW R1200GS Adventure. I hear you. mainstream paparazzi talking about how great it is, how versatile it is, how everyone should get one because it’s the “Best bike in the world”. How about a different perspective from someone who owns one, and has done for the last two and a half years?

My motorcycling career began with sports bikes. From my scream your knackers off ZX6R, to my stallion of a RSV 1000 R. Even having dabbled into the scene of a ZZR1400 (The ZX14R for those across the pond). To then have a group of mates with small displacement trail bikes such as the KTC EXC450, the Husqvarna TE250 and the likes. They kept egging me on to get down on some green lanes for a muddy blast. So there I was, looking at this BMW F800GS Triple Black with sod all miles. I bought it.

Roll on a few years, and with the enjoyment of having the 800GS, I decided in my head that I wanted the 1200 boxer cousin. I went into my local dealer (BMW) to have a little peruse at some bikes where a very enthusiastic sales person came over (having known him now for a few years). He told me of two that had recently been traded in.

A green GSA with that Master Chief look to it, but with higher mileage, and this beautiful red GSA in almost perfect condition. It was the 2016 model registered late 2015. Now to put into context, I am not rich and blasé about money. It is still a consideration.

This model was the TE spec with all the gizmos and at new, would’ve cost in the region of £19k!!!! Not the sort of money I could afford. But with only 2100 miles on it, with 5 service stamps and being told the previous owner had a little more money than sense, decided to trade it in giving someone like me the option to buy it at half the price. Yes, that’s right, just under £10k for this. Obviously, I went for it, and it is the bike I ride to this day.

Fast forward 2 and a half years of ownership and it still puts a massive grin on my face! It does almost everything I want it to, is a fantastic work horse with the ability to never look out of place with dirt and scratches on it. She’s now done 35,500 miles and I still have many more plans with it.

Now, I hear you when you say that its an old mans bike, a bike for those Starbucks visiting adventurists, the modern day touring bike etc etc etc. And generally, I would agree with you, there are plenty of these and the smaller tanked GS version going around that’ll do soft miles. Both on tarmac and the occasional Sunday blast.

Let me tell you, that is not me. My bike is used daily, through winter, through summer, commuting, riding for fun, camping, shopping, green lane riding, you name it! What do I honestly think? A 30 year old average guy with a reliance for his noble steed, I still love it!

No, it’s not the ‘best bike in the world’, but its bloody close! Yes, they have their issues, there’s no denying it. The rear shock uses cheese for its bushes. Philadelphia to be exact. The annoyance of linked brakes means rear pads get eaten considerably even from a rider who only really uses rear brake at slow speeds.

The annoying fact that you will always be overtaken by someone on a KTM 1290SA. Yes.. I’m a little salty. And the fact that the gearbox and quick shifter/auto-blipper (or as avid GS owners will tell you, its not a quickshifter, it’s gear shift assist pro….. yes I know…. It’s the same thing!!!!), but aside that, the bike has stood up to some serious abuse. I have no qualms in strapping a shed load of stuff to the back, jacking up the suspension with the electronic wizardry, and slamming it around some tight corners with no dramas.

So to summarise, would I recommend one? Yes, of course I would! It’s a phenomenal bit of kit, even to the point of being able to annoy some sports bike riders in the twisties. Do I think everyone should have one? Heck no! But with all things, don’t knock it until you try one. You will find yourself enjoying it more than you maybe would’ve thought, it’s surprising. And still makes heads turn with the full titanium Akra system.

The Shocked Sockets team would like to extend a huge thank you to Wadey_Moto on Instagram, AKA Shaun for providing this write up. Be sure to follow Shaun for more of his BMW R1200GS Adventures!